We wish a Happy Memorial Day to you and your family.
Posted by Unknown at 9:03 AM No comments:
Email ThisBlogThis!Share to TwitterShare to FacebookShare to Pinterest

Correction of Prior Posts

Correction to prior posts on family in Canton, MI.  The city is not Canton.  The correct city is Brighton, MI.
Posted by Unknown at 8:40 AM No comments:
Email ThisBlogThis!Share to TwitterShare to FacebookShare to Pinterest

Bengal Kitten in Her New Home

The family in Canton, MI was kind enough to share photos of their brown-spotted female kitten who is getting comfortable in her new home.  These photos of the kitten were taken as she laid down in their daughter's doll house.  Too Cute! 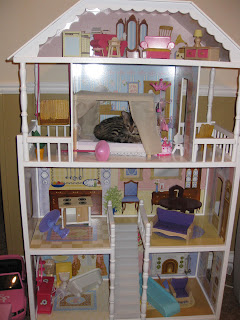 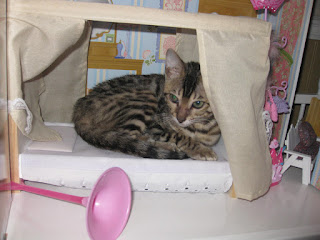 Posted by Unknown at 3:36 PM No comments:
Email ThisBlogThis!Share to TwitterShare to FacebookShare to Pinterest

It is inspiring to find that so many people desire to have one of our exceptional Bengals.  One of our Bengal kittens went home today with a very nice lady from Canton, MI.  She did research on the breed for several months and was on my wait list since early this year.  She chose a female brown-spotted kitten that is now part of her family.  This is the heart of what we do - we raise Bengals from some of the best bloodlines available to bring joy to the people who want and appreciate them.
Posted by Unknown at 8:59 PM No comments:
Email ThisBlogThis!Share to TwitterShare to FacebookShare to Pinterest

While growing up, there were different pets in our house over the years.  When we were youngsters we had a small turtle, a hamster, a rabbit and a kitten.  As we got older and became teenagers, we had pedigreed dogs.  We had pedigreed German Shepard's, a Maltese, a greyhound and a collie.  As adults we had a couple of rescued dogs and a pedigreed Akita.

We purchased our Akita as a puppy from a private breeder.  She was a lively, happy ball of energy. We had our Akita for 8 years when she began to have health problems.  At the same time, there was a huge recall of dog food.  Though her brand was not specifically named, we believe her brand should have been part of the recall as many of her symptoms were the same as those dogs who were fed the recalled food.  We tried everything our veterinarian thought might help and even took her to vet. specialists.  Nothing they did helped her.  She was suffering so badly (she even went blind) that we had to have her put down.  She had such a great personality and presence, we knew we could never find another comparable Akita.  To this day we do not have a dog.

As time went on, we wanted another pet.  We began going to cat shows and learning about the different breeds.  I was at a cat show with my daughter when I saw my first Bengal cat.  Amazed at the beauty of this particular breed, we did a lot of research on the breed's origins, temperament, qualities as a domestic pet and more.  We liked what we found out about the breed and decided to buy a domestic pedigreed Bengal kitten.  We named her Gabrielle (Gabby for short as she replies vocally when you talk with her).  She is a classic brown/black spotted Bengal.  Her coat has a lot of golden glitter on it.  Her coat actually shimmers in the light due to the glitter.  She is very sweet and a joy to have around.  Here is a photo of her. 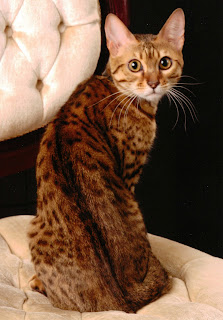 Posted by Unknown at 10:08 AM No comments:
Email ThisBlogThis!Share to TwitterShare to FacebookShare to Pinterest

Welcome to the Adore Cats Bengals Company Blog.  We will be sharing information about Bengal cats, animals in general and people that you may find interesting.  Feel free to suggest topics that are relevant, share your constructive thoughts and give your insights so that we can exchange ideas and grow.
Posted by Unknown at 1:49 AM No comments:
Email ThisBlogThis!Share to TwitterShare to FacebookShare to Pinterest
Newer Posts Home
Subscribe to: Posts (Atom) 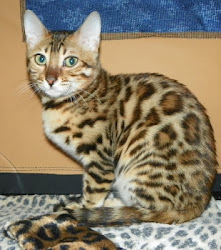 Want One? Click the link below to go to our website, click the Priority Request tab, fill in the form and submit it to us. *Note: All pet kittens and cats are vaccinated and spayed or neutered before they leave us.